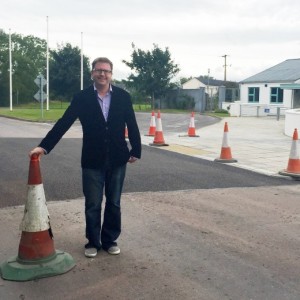 On being elected I was determined that funds collected from the local property tax (LPT) must be spent locally and not redirected back to national government. At council level, we have made allocations around the district with significant grants being made to Tidy Towns and residents association groups across the Naas district. The LPT monies are also being targeted at playgrounds in Kill, Sallins and Caragh, undergrounding of cables on Naas main street and support for the Naas-Sallins greenway. I have also brought forward various road projects for attention and tried to get a balance according to geography and where the need was greatest.

One of the local roads projects I nominated was an upgrade of the Kerdiffstown Road, Sallins. This is one of the busiest roads in Sallins as most of the village use it as the most direct route out onto the M7, especially the commuters who use it daily. The road also is home to Sallins national school. I brought the area engineer, David Reel, down to inspect the road at the start of summer and I thank him and his team for their attention to the project since. The road improvements will start at the school and repair the speed bumps, which had become very rutted, as well as putting down new road markings all along that stretch. This will be a proper job, not just a few potholes being patched, but a full resurfacing which will last for decades. The work is now underway and should be completed before the schools return.

I have also requested that the canal road out of Sallins to Digby Bridge be repaired and had brought the engineer along the route prior to the works there this summer. The roads crew have relined several road markings on my request around Sallins village recently and of the top ten issues recently identified at a Sallins Community Council public meeting, I am satisfied the majority have now been done. The rural roads projects have also seen significant works completed over the summer in Kill, Ballymore Eustace, Kilteel and Caragh which I’m very happy with the finished jobs. Tribute to the engineer and his teams for their efforts.