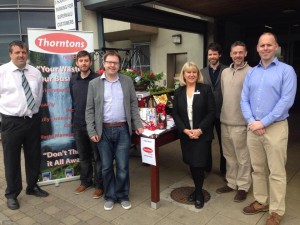 It was great to be at the launch of the new recycling facility in The Waterways, Sallins last Sunday, April 20th. Everyone involved in the Waterways development must be commended for their continued hard work and community effort which has led to this recycling facility being set up for both residents and business alike. The Waterways complex includes residential, commercial and retail elements and they have joined forces, with the help of grants from Kildare County Council as well as their own resources, to put in place a new systems which will promote and facilitate greater levels of recycling across the complex.

It’s another major achievement by all the team there including the residents, businesses, and management including many others who have been pro-active in bringing the complex forward over the last several years. I have always been supportive of the Waterways and have been working with the development since 2008 at both a community and Council level role. I believe this innovative recycling project is a roadmap for other developments and communities to follow and I am happy to offer my support to any local groups who are considering similar projects.

On a very similar note, way back in 2008 after my repeated lobbying of Kildare County Council,  we were successful in securing glass recycling at The Waterways too (read story here).