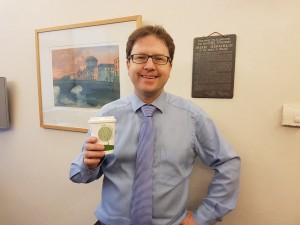 Compostable Cups from Zeus Packaging Leading the way in innovation

I was delighted to speak in support of the Waste Reduction Bill at Committee Stage last week. You can read my full transcript here. I support the principles of this bill, and we have consistently been and remain a firm defender of Ireland’s natural environment. We firmly support efforts to encourgage recycling and reduce waste.

Recently I met with Margaret Brady of Zezuz Packaging to learn about their new product, the first compostable cup, which can be disposed of in the ‘brown’ bin, with other compostable waste. The technology and the products are already there. It remains to support them in the marketplace.

While in government, Fianna Fáil introduced Repak, a not-for-profit company which supports recycling. As a result, between 1997 and 2011, rates of recycling in Ireland increased from 15% to 66%. This was more than a fourfold increase, and one which this government and the previous one have failed to match.

Fianna Fáil also made Ireland the first country to have a levy on plastic bags, a policy which has been emulated around the globe and that has kept millions of plastic bags out of our hedgerows, oceans, landfills, and green areas.

I do believe that further consultation with stakeholders is needed in order to design a system that is fair, workable and effective.

To this end, bill was supported at second stage, and we will work constructively with our colleagues during these Committee debates to improve and build upon this bill, in the interest of creating a better Ireland.