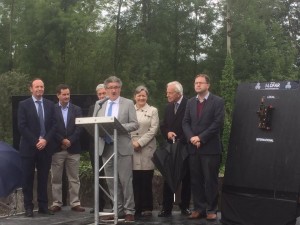 I was in Birr Castle recently for the switch-on of the I-LOFAR radio telescope which is Ireland’s part of a giant European telescope which can scan deep space. It works as a set of distributed nodes which each send data back to a central supercomputer.

The Castle has been a home for astronomers for centuries since the original Lord Rosse built the world’s biggest telescope there in the 1800s. The technology has changed but the intention remains the same and the current Lord Rosse was on hand to send the latest model live with us last week.

In my role as Science & Technology spokesperson it is a privilege to be part of events such as these. They showcase both Ireland’s historical and ongoing excellence in engineering & science. Well done to Professor Peter Gallagher from Trinity and to all involved in this exciting project.