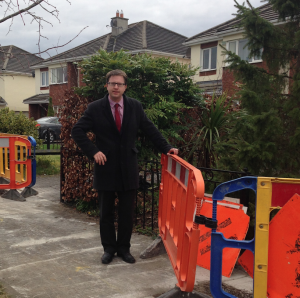 Taking in Charge of estates remains a hot topic around County Kildare as numerous estates are waiting for the Council to take them over so they can begin to avail of public services. In some cases estates are not even having their street lights repaired at present as the council is not legally responsible until an estate is formally taken in charge.

I have been campaigning on this issue for some time and have helped some estates get taken in charge in recent months. However, just when progress was being made, a new setback has arisen which will cause more delays.

There is a huge backlog of estates waiting to be taken in charge, as everyone knows, things were starting to improve with the Council beginning to get through these. However another huge setback has been dealt to these estates now due to the government again rushing through legislation.

What has happened is that the legislation to create Irish Water fixes a lock on all watercourses, drainage and sewer systems including those in estates. This has the presumably unintended effect of meaning they cannot be taken in charge as S.180 of the Planning and Development Act states that taking in charge must include all waterways in estates.

Kildare County Council and Naas Town Council have both confirmed to me that they will not be advancing any more estates for Taking in Charge until this situation is clarified. It may well need an amendment to the legislation and I have asked my parliamentary colleague, Fianna Fáil Environment spokesman, Barry Cowen TD, to raise this in the Dáil.

The impact to ordinary residents is that their estates continue to sit in limbo until this is resolved. It is also another example of the government rushing legislation through the Dáil with inadequate debate and vastly insufficient consideration given to any implications. The government need to take the Oireachtas seriously and stop steam rolling legislation.