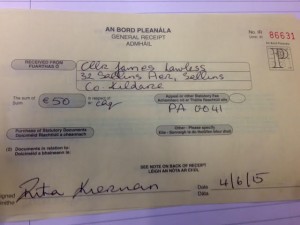 Submission receipt from An Bord Pleanalá

Yesterday was the closing date for submissions on the Maighne Wind Farm. The proposal here is for 47 x 167m tall turbines  dotted right across the rural landscape from south Meath across North West Kildare. I attended many of the meetings organised on this and listened to community concerns. I also met with Weston Aerodrome last week and was alarmed to discover they had not even been notified, despite the impact on light aircraft in the vicinity. Following our meeting they are also lodging a serious submission. I have inspected turbines up close at Mount Lucas and elsewhere and dealt with a wind turbine planning application before in Eadestown last year. In short I think they are over-rated in terms of energy production and under-regulated in terms of design and operation. There is a place for them as part of a wider energy package and in clustered locations well away from housing, but dotted across a scenic rural landscape in close proximity to houses and natural amenity all the way around is not it.

My submission re Maighne Wind Farm was made to An Bord Pleanála yesterday, and is as below:

Description: Maighne Wind Farm consisting of up to 47 no. turbines, 1 no. electricity substation and associated works, Co. Kildare and Co. Meath.

I would like to record my objection to the proposed development as per above reference number. I am familiar with the content of many of the community objections and I share and support their concerns.

My principal difficulty with the current application is that it is premature and comes at a time when various relevant planning guidelines are currently in a state of flux and acknowledged to be in need of updating.

Kildare County Council is currently working towards a set of guidelines for wind energy projects as per the council energy committee; similarly at national level a public consultation has been underway since the Minister responsible launched a consultation exercise under s.28 of the Planning Acts in December 2013.

These guidelines will have an immediate and direct bearing on the consideration of planning applications such as the instant one and it would appear premature and poor practice to allow a project proceed which will involve permanent and long-lived structures, whilst cognisant of the fact that updated guidelines governing the planning, construction and operation of same are acknowledged to be still awaited.

After two years we appear to be no closer to seeing updated, revised guidelines and I would consider it very poor planning practice to allow a development of this scale proceed despite that regulatory hiatus.

Whilst serious and significant concerns regarding setback distance, shadow flicker, noise levels, end-of-life disposal and many other questions remain open it would seem irresponsible to grant planning regardless.

It is understood that the midland bog landscape may be a candidate for European SAC (special area of conservation) status at some point in future. It is understood that there is also an amenity and conservation potential within the terrain and areas described. This asset would be lost were it to become industrialised. The Donadea Forest Park in proximity to the proposed Hortland cluster is also of significant amenity and heritage value also.

The growth in wind turbine interest in Ireland has been driven in the main by the international agreement with the UK to supply energy via the interconnector and help satisfy UK compliance with renewable energy. Since the EU significantly revised their target dates (by a factor of years) and with the UK agreement being rowed back from, there is no apparent demand or urgency to any current applications. Put plainly it is not clear what market the purported energy generated is expected to serve. It is also questionable whether wind speeds at the site can support sustainable generation or whether ancillary sources would be required also.

Local roads in the rural areas of North West Kildare are not capable of supporting the transportation of equipment, machinery and particularly the turbine towers themselves, without significant recalibration. There are also legitimate concerns as to how the purported energy would be transported out of the region and what the mechanism and footprint of this would be and what impact it would have on the rural settlements.

Best practice in these projects would advocate full and frank local consultation and in an adequate timeframe. Whilst a public consultation was apparently held the event received virtually no publicity and was very inadequate for a project of this scale, geographic expanse and long term impact. Further, multiple key stakeholders emerged not to have been notified in any respect, including Weston and other aerodromes.

For the reasons above I wish to record my formal objection to the planning application 09.PA0041. I would also hope an oral hearing is facilitated at which these points could be explored by all stakeholders. My contact details are below in the event of any queries.