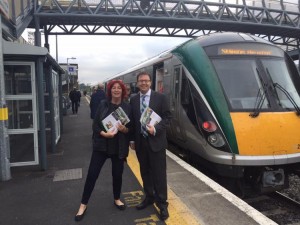 Cllr. Carmel Kelly and I at Sallins Train Station Recently.

I am delighted that Sallins, Naas and Kilcock train stations will be moved into the ‘short hop zone’ and fares will be reduced by up to 50% following a series of meetings I held with the National Transport Authority (NTA) on the matter.

After a prolonged engagement with the NTA, including meetings in Leinster House, and sustained lobbying with both them and Irish Rail, on the disparity of train fares for commuters in Kilcock, Naas, and Sallins they now have revised the zoning model and are making significant changes for the betterment of commuters in these areas.

This was a major issue for commuters I travel with daily from Sallins train station and was also brought to my attention frequently at my clinics in Kilcock and also through Cllr. Paul Ward who has championed Kilcock commuter’s case.  The change means fares will decrease significantly for train users from these stations. Previously in Kildare North the short hop zone ended at Maynooth and Hazelhatch & Celbridge stations, I am delighted I have secured its extension to Sallins, Naas, and Kilcock.

These Kildare stations will now be brought into the short hop zone. This was the number one issue I raised with the NTA at our meetings during the summer. It will come as a great relief to many of the commuters I have met at these stations. It is my understanding this new zone will result in up to 50% savings compared to previous tickets prices.

This is huge news as it opens the entire market of Sallins and Naas to a wider audience. It has the potential to transform the area with significant footfall as rail fares become cheaper, and the use of the leap card is extended to the area. It will also mean when longer term planning is being done that these stations are in the inner zone for everything from a new Metro Service to Late Night Christmas Specials.

As a founding members of the Naas and Sallins Rail Users Group and rail commuter for the past ten years it has been a long lobbying campaign to secure this rezoning. This is a fantastic result for everyone in Naas, Sallins and Kilcock.