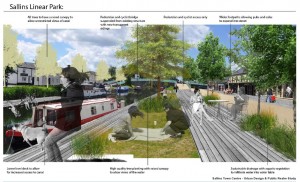 The Sallins Local Area Plan has almost concluded its rounds of consideration in the council and has been sent to the Minister for final sign-off. As expected the Minister has raised a concern over Alteration 20 relating to the additional residential zoning on the Bodenstown road. However the key piece of this jigsaw is the 40 acres of Amenity land that come with it. This was supported by all Councillors unanimously when the plan was going through as the community gain behind this proposal will allow for development of multiple playing pitches, running track, a new community building for all the different groups in the village. It will bridge the gap which has long existed of over development without any facilities in the village to go with it. The Minister has invited submissions on the Alteration before he makes a ruling and I include my submission here.

One Reply to “Sallins Area Plan – Support for Amenity Lands”