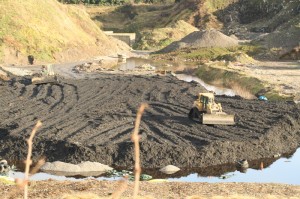 Clean up work from 2011 at Kerdiffstown Landfill

Kildare County Council have rejected the application for a new waste facility adjacent to the contentious Kerdiffstown landfill site. Cllr. James Lawless has welcomed the decision which will come as relief for residents living nearby in Sallins, Naas and Johnstown. The application submitted by David Boylan Limited earlier in 2014 was met with unprecedented resistance with over 800 objections lodged.

The council have made the right decision this week as there were grave concerns over this proposed facility. The public had lost trust in future developments at this site given past environmental and safety abuses. Hundreds of objections were submitted, including my own. Hopefully the rejection of the waste permit now finally closes the curtain on any further plans for waste dumping at Kerdiffstown.

The efforts of the CAN group must be commended. They mounted a well informed and expertly run campaign against the application and their efforts came good today. The Kerdiffstown landfill site has been subject to numerous attempts to expand operations there and options for the extremely costly clean-up are still being worked out. The environmental disaster that culminated with the entire landfill blazing in 2010 cannot be repeated. Hopefully the news this week will help allay the legitimate concerns of local residents that the council are taking these matters very seriously.