The boundary commission have now closed for submissions and will move on to make their report. I made a submission relating to the Naas area. In my submission I have sought to frame the Naas area, in so far as possible, within the one Dáil constituency which is in keeping with the review terms of reference whilst also addressing current population overloading in the Naas area.

In a nutshell I have taken Ballymore/Kilcullen out of the ward (which are population centres in Kildare South) and have swapped in Bodenstown and Oughterard from Kildare North to make up a new unit. Bodenstown in particular has an excellent case for being in the same local area as Sallins and Naas as is practically the same community yet is currently divided. The new ward I have created is shown below. 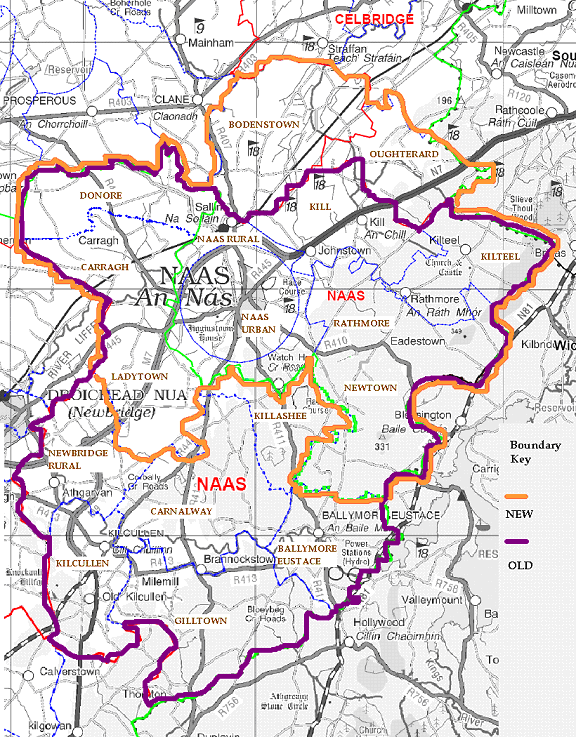 The principal difficulty with the current Naas area is that we are under represented. Kildare county is grossly under represented in the first place and Naas is the worst offender within Kildare. We have fewer councillors per head of population and more constituents than nearly anywhere else. To put it in context, Dáil constituencies are constitutionally bound to a minimum and maximum population per TD ratio. This is to ensure fairness, equal access and consistency of representation across the board.

For instance Carlow-Kilkenny has 47 Councillors to its 5 TDs, Longford-Westmeath has 44 to its 4 TDs and yet we have 25 for our 7 TDs (as the TD number must constitutionally reflect the population size it is obvious we have much greater population with far fewer councillors to go round)..

Unfortunately the review freezes the totals in any one county, however at the very least internal variances should be addressed.

There were a number of other submissions on Kildare and on the Naas area, most of which were broadly in agreement. The comission reports mid-June so we’ll see what they’ve got in store for us then.

A full copy of my submission is available here.