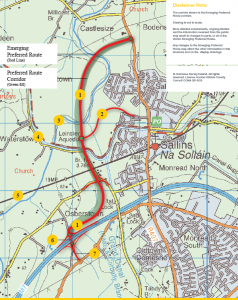 There is welcome progress on the Sallins bypass and M7 interchange as it has been confirmed that the next stage of the project is about to commence. The project went to public consultation last May and is now advancing to the next stage of detailed design works.

This is a very important project for Sallins village and also for the infrastructure of the wider area. The village will benefit greatly from having through traffic routed around it and it will also allow other projects to proceed which are currently on hold, pending the bypass. The final route was confirmed last May and we now know that it will not go through any of the residential estates as had been considered in the very early drafts.

I have been advised by the Council that the next step of the project is about to commence, with an Environmental Impact Survey and CPO notices both to be advertised by the end of November. There will then be a further period of consultation to allow submissions on these and that window for feedback will be open into early new year.

This will allow both the new Millennium Road interchange to the N7 and the bypass itself to advance and it is great to see the planning moving ahead, this is a very positive project for everybody living and working locally.

One Reply to “Progress Update on Sallins Bypass”