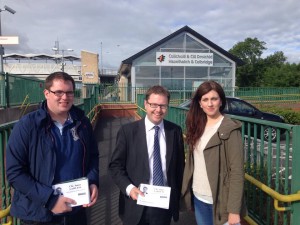 I recently met with Irish Rail to raise concerns regarding the rail services in North Kildare. In what was a positive meeting I discussed the main issues that commuters who use the train services daily, including myself, have found need improving. Irish Rail were receptive to these opinions and a number of improvements and reviews were agreed at the meeting.

A big issue at this meeting was the punctuality of the 08.19 morning train from Sallins which is almost consistently late. This has knock on affects for those needing to go to work or make appointment on time in Dublin. Irish Rail have told me that the NTA had a new service running from Cork which has priority on the tracks however they agreed with me to look at this consistent delay and will raise it with their colleagues.

There were other issues which I raised such as over pricing from Sallins, overnight works and timely notices of such works, and inconsistency of platforms being used. I am positive the outcomes agreed will be met over time by Irish Rail and will continue to work with them to see these improvements through to completion.