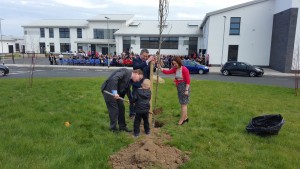 At a tree planting ceremony at Naas Community College

Pressure must be kept on the Department of Education to progress the new build of the school as quickly as possible.  There is a considerable demand for places in the school and this is a key part of the educational infrastructure for Naas and the surrounding areas complementing the existing schools by placing a co-ed ETB (Education and Training Board) school into the North Naas area to cater for students from all over the town but also places like Sallins, Kill, Johnstown, Rathmore and all that hinterland.

The school has received planning permission for a brand new building at Millenium park, Naas and will cater for over 1,000 pupils in a new state of the art building once the construction phase is completed.

However the delays have been frustrating for the school community and I have repeatedly brought them to the MInister’s attention. The Department and indeed the ETB  are 100% committed to this project, and great progress has been made despite scare-mongering from some opportunistic politicians, however the delays are causing understandable concern for many parents and the wider school community.

The Department must move faster to prioritise this project and I continue to raise this regularly in the Dáil and with Minister Richard Bruton. I attach my most recent parliamentary question on the issue which confirms the build is moving ahead and that the ETB have lodged the necessary documentation, the ball is now in the Department’s court and I am calling for them to move very quickly forward.

The school is vital, with the existing population plus the growth planned for Naas, and it must become a top priority for the Department of Education to now start the build.

To ask the Minister for Education and Skills the timeframe for the construction and remaining stages of a new building for a college (details supplied); and if he will make a statement on the matter. (Details Supplied) Naas community college, roll number 76194S : James Lawless TD

As the Deputy may be aware, the project to which he refers has been devolved for delivery to the local Education and Training Board (ETB).

Planning permission has been received for the project which is at the detailed design stage.  In this regard, the Stage 2B submission was recently submitted to my Department for examination and approval.  The outcome of this examination will be conveyed to the ETB as soon as it is available.  As the project is still in architectural planning, it is not possible at this time to put a timeframe on when the project will commence on site. : Minister Richard Bruton