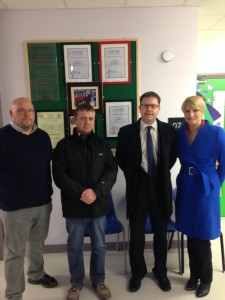 Senator Power and myself met with Parents from Naas CNS in December.

I’m relieved and delighted to learn of the news that Naas Community National School have now been approved to remain in the Craddockstown school buildings for the forthcoming year and remain there until a new dedicated home is made available. I had been lobbying for this outcome for some time and recently enlisted the support of Fianna Fáil National Education Spokesperson, Senator Averil Power.

In December I brought Senator Power to Naas to inspect the facilities and discuss the school situation with both parents and management involved with the new schools. We visited the new school buildings at Craddockstown, where we met with a delegation from the Naas CNS Parents Group. The parents outlined in detail their concerns regarding a permanent home for the school. We also met with KWETB management and viewed the Millenium Park site. Senator Power followed up the December visit by raising the issues with the Department and Minister.

This week the department have granted the national school permission to remain in the Craddockstown buildings. Well done to the Parents Group and all the KWETB management team for securing this commitment. I met both a number of times re this issue and both Averil and our Dáil spokesperson Charlie McConalogue raised the topic repeatedly in the Dáil and Seanad on my behalf. I know the CNS parents are massively relieved by the decision and the main thing is that their kids will no longer have to return to prefabs. We will also continue to support the KWETB and Sean Ashe in lobbying to advance the new school build at Millenium Park.

It is also imperative that the build of that new secondary progresses apace. Senator Power, following our visit to the site and meeting with KWETB management, has been stressing that to the Department also. The combined facility will form a kind of educational campus and I am delighted for all involved.