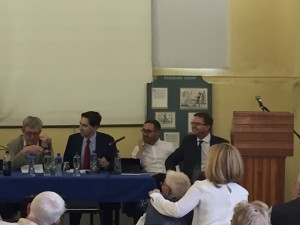 The progressive and open nationalism of the Catalans, the Scottish and indeed the Irish must be championed and distinguished from the narrow and often false flag patriotism of the new cheer leaders and charlatans of the 21st century.

The new divide is not left v right but open v closed societies.

Perhaps “Patriotism is the last refuge of the scoundrel” – it is certainly frequently invoked as a flag of convenience and a rallying point for many other things.

If we look across the water at our brave Brexiteers – we saw the peculiar invocation of English national pride as a mechanism to unwittingly prise apart not only a United Europe but quite possibly the United Kingdom.

The rose tinted glasses of that halcyon, bygone age were actually chronically out of focus as England as a separate nation state has never really existed barring two brief periods in history. And that same empire of Boadicea and Queen Victoria was a product of Scottish invention, Welsh industry and Irish energies, as much as anything from the flag of St. George.

Across the bigger pond we see similar calling cries, “Make America Great Again” is now trumpeted from the grand old party, or at least will be for another few months.

What exactly is the golden age which is being summoned up by these cries?

Delegates attending the recent Republican conference were unable to answer this question when asked by CNN. Was it the days of racial segregation? The days when slavery was normal? The days of the cold war? The great depression?

Is it possible that today’s putative independence movements, these agents of nostalgia, are actually substitutes for a greater gap, which they cannot or will not articulate?

Technology, automation, globalisation and the shift in jobs overseas, these all combine to the greatest period of insecurity the west has ever seen. The middle class has greatly expanded but no longer enjoys security. When a good education and a solid work ethic may no longer be enough, this represents a failure of the entire Western dream. Home ownership, permanent employment, the financial means to start and raise a family – these staples are all under threat and no longer guaranteed, and with that, the centre begins to crumble. And if the centre cannot hold, then the falcon will seek a new falconer.

But the demagogues have no solutions. As President Obama so pithily described Mr. Trump “The Donald ain’t really a plans guy”. It is obvious, on the potential ascent of Trump Towers to the White House, there isn’t even a plan A, never mind plan B.

Meanwhile our Brexiteer friends patently had no plan. Winning was not expected – the campaign was satisfaction enough. But having dragged, not only a nation but a continent, over a cliff with it, the swash buckling buccaneers lost their appetite. Within a week of ballots being counted, there was barely a one left on stage.

What distinguishes the leaders of 16 and 21 and beyond is that they had a plan. They stuck with it, put it into practice and followed it through. Those that survived, rather than fleeing the stage in the immediate aftermath, not only led from the front during the ensuing wars of independence but went on to lead the new state.

Indeed a direct predecessor of the office I now hold, as FF TD for North Kildare, was Thomas Harris. As a teenager he walked from Maynooth to Dublin where he saw action in the GPO; after embedding himself in the rising, the war of independence and its aftermath he went on to serve in Dáil Eireann until 1957 as a Fianna Fáil TD.

He was typical of that generation and fundamentally understood that Independence is an enabler rather than an endgame and must include social and political change.

The 1916 leadership and those that followed planned meticulously and acted decisively. From the ballot box in 1918 and the convening of the first Dáil along with functioning Republican courts up and down the country. A broad program for government was enacted and an alternative native administration became accepted de facto based on competence, popular support and grasping the nettle as much as whether the harp or the crown marked its pillars outside.

Theirs was also an inclusive vision. “Conscious of the differences carefully fostered by an alien government” and determined to overcome them. Of the 7 signatories to the proclamation, 2 were born outside of Ireland and 4 had lived substantially abroad already in their short lives. Of the surviving veterans, Aiken, McBride and DeValera are just three prominent examples who strode large on the world stage.

We first imagine Irish unity manifesting at the battle of Clontarf when the chieftains came together under Brian Ború. Although in reality Gaelic chieftains also allied with the high king’s opponents and he even had some Vikings in his own ranks. The island has since absorbed heavy plantations from England and Scotland in particular and in more recent years welcomed migrants from Eastern Europe and further afield. Our scholars tell us the early inhabitants of the island included Milesians, Fir Bolgs and Tuatha de Dannan. And that the Irish language has roots in Indo­-European, Sanskrit and the Celts of Gaul. Irish nationalism has never been about a narrow isolationism or a closed border policy. Rather we welcome diversity and recognise that the whole is greater than the sum of its parts.

Governments today have a responsibility to follow that lead. Real plans are required to confront the actual challenges, rather than obfuscating behind smokescreens of past imagined glories. Scapegoating minorities or creating divisions for the sake of mass market electoral support are no substitute for pragmatic, principled political planning. The leaders of 1916 and the revolutionary era which followed it were a broad church with a radical and egalitarian agenda into which all were invited