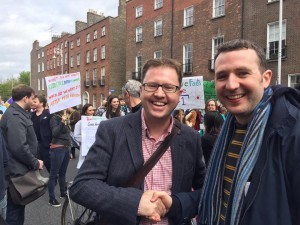 Pictured at the march for Science recently.

As Fianna Fáil Spokesperson on Science, Technology, Research& Development I have urged Minister Francis Fitzgerald to accelerate the process of Ireland joining CERN.

Membership of the European Organisation for Nuclear Research (CERN) has major benefits for the research and development sector in Ireland yet no progress has been made by the Government in joining the organisation.

I was encouraged by comments made by Dr. Gianotti of CERN last October regarding the possibility of Ireland joining the organisation and contributing to the research that the collaborative body conducts. However since this meeting ten months ago the Government has not moved on this issue.

There are great benefits to membership, including high level research contracts, which are currently being awarded to other European countries due to our lack of membership.

I have raised this matter with the Minister on three separate occasions before the summer recess. As Fianna Fáil’s Spokesperson on Science and Technology I will be publishing a policy paper which will set out our ambitions for the sector, including membership of CERN.

CERN has already proven to be a successful international collaborative body. I believe the cost to the exchequer is affordable given the benefits it brings to our third level institutions and research sector. The approximate annual fee of €10 million for membership of CERN is entirely justifiable based on the return to the State from contracts, investment, and further research opportunities.

Our next generation can also benefit by being a member of CERN. The opportunities for educational outreach around science, technology, engineering and maths subjects will be hugely beneficial in growing a high calibre of graduates to work in the industry.

I would strongly urge the Minister to make this membership a priority in her role for the benefit of our science and technology sector.

You can read more on the Fianna Fáil website here.