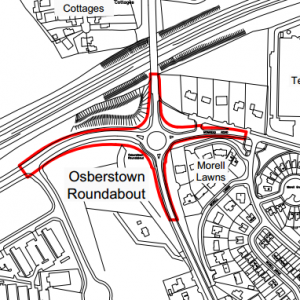 Millennium roundabout update – I raised this again at the recent Naas area council meeting and questioned the benefits, the duration and the standard of works on this job. The lead engineer apologised on behalf of the council (first time I’ve ever seen that happen) which I did accept with good grace and he said the works would be finalised in two weeks. I queried the massive footpaths to which he replied that these offer crossing points would help the many people that walk to and from the train station, he also said there would be two lanes on each approach when finished (though I find it hard to see where the two lanes will go). That’s about a week ago and this week there is another ridge on the Naas side of the roundabout which is like driving up a sharp kerb on every journey. I will be asking the engineer to join me onsite tomorrow morning to talk to contractor and find out what on earth is going on.

One Reply to “Millennium Roundabout Update”