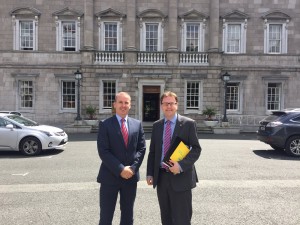 I was delighted to hold meetings with both the National Transport Authority and Dublin Bus to lobby for better and more cost effecient services for Kildare commuters. The meetings which took place in Leinster House addressed ticket costs, frequency of services, and forward planning as the county grows and more demand is placed on transport routes.
We held very productive meetings with both the NTA and Dublin Bus. With the NTA I wanted to really make the point that stations like Sallins and Kilcock were very expensive compared to one stop further in and that whilst I accepted this was due to zoning boundaries, the step change was too much.

It costs €19.95 for a return rail ticket from Sallins to Dublin City Centre whilst from next door Hazelhatch station it costs €9.90.

This is a 100% increase for one stop further out the line. It means it is simply not a cost effective option for students, for day trippers, shoppers, people going to hospital appointments or anyone who is using the train for one off journeys. Whilst I appreciate the monthly and annual commuter tickets are good value, there is a rip-off in place for people making standard day journeys and it is just not acceptable. Cllr. Paul Ward from Kilcock joined us at the meeting and outlines how the cost of going from Kilcock to Maynooth is actually dearer than from Maynooth to Dublin.

Whilst these fare anomalies also occur around zoning boundaries, the jump is excessive and should be staggered for fairness. If we want people to use our trains then ticket fares have to be priced competitively.

I also met the Dublin Bus CEO and Management Team. We discussed their services into Maynooth, Leixlip, Celbridge and Ballymore Eustace. We also looked at connection options from Hueston into city centre. One particular issue I raised was the Sunday bus service from Celbridge; commuters have raised this with me as a timetable gap and Dublin Bus have committed to reviewing times there with a view to expanding the service.