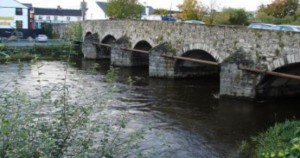 I have sought additional sources of funding for a second bridge in Celbridge by engaging with the Minister for Housing, Planning, Community and Local Government Simon Coveney to secure finances from the Local Infrastructure Housing Activation Fund (LIHAF). The fund is currently closed but the Minister will consider reopening the fund following lobbying. You can read the full parlimentary question here.

The Local Infrastructure Housing Activation Fund main purpose is to alleviate infrastructural blockages with view to delivering houses to an area. Currently at peak times Celbridge Main Street comes to a standstill as commuters try navigate over the one bridge in the town, often taking a half hour or more to get to the Dublin Road from the Clane Road.

This is particularly important in the case of the context of the Celbridge Local Area Plan, currently under discussion, and on which I have attended a number of public meetings with concerned residents. It is apparent that the quantum of new housing being proposed for Celbridge would require a serious infrastructure upgrade, as already the town struggles.

I have called on the Minister to use the local infrastructure housing activation fund in conjunction with Kildare County Council to progress the second bridge in Celbridge. I understand the council did submit for funding in the Celbridge area however this was not approved by the Department at the last round of applications.

Following my representations the Minister will consider reopening the fund to allow for additional applications. I will continue working with the Department and the council to support any application for a second bridge when the fund reopens.

I have also included funding for the second Celbridge river crossing in a recent submission I made to Minister Pascal Donohue on the Capital Expenditure Program 2017-2022.