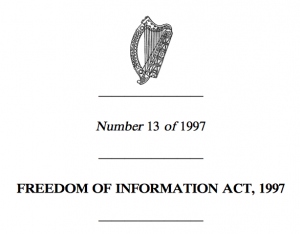 The government’s last minute climb down on attempts to limit the new Freedom of Information (FOI) bill it is currently bringing into law has to be welcomed. Having used FOI on local issues myself it is a vital part of democracy.

Fine Gael and Labour had promised to reform Freedom of Information when they entered government. They promised to make government more open by removing fees and making the business of state more transparent. However they actually tried to do the opposite when at the last minute Minister Howlin added a number of amendments to the Bill which would have had the effect of putting FOI requests out of financial reach for most journalists and requesters.

The government attempted to pull off a massive confidence trick on this. Rather than opening up government they actually tried to lock it down. The change proposed would have massively increased fees and put FOI requests out of reach of all but the most heavily resourced organisations. What is particularly sneaky is that Minister Howlin tried to introduce these amendments at the very last stage when Dáil and Seanad scrutiny was almost over.

I used FOI myself very effectively last year when I obtained various records from Kildare County Council which confirmed that public lighting had been cutoff to multiple estates. Those requests were multi-part and under the proposed changes I could probably not have afforded to unearth that information.

The norm internationally is for FOI access to be free of charges completely. In the vast majority of EU states FOI is free. That is real open government. That is what the government promised but they then tried to do the complete opposite. Whilst the Minister has now climbed down on this sneak proposal under duress, he should go a lot further and actually deliver on his promise to open up FOI which he has sadly shown no intention of doing.