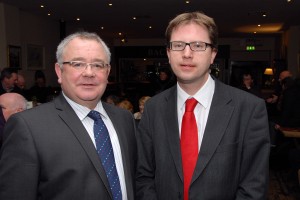 I asked Deputy O’Fearghail to raise this matter in the Dáil. The Minister’s response is at odds with what Kildare County Council are telling us.

Recently I had questions raised in the Dáil seeking clarification regarding the stalling of taking-in-charge of estates since the set up of Irish Water. Kildare South Deputy, Sean O’Fearghail, tabled a number of questions to the Minister on my behalf to clarify the situation on water and taking-in-charge. I raised this issue initially in early April.

Minister Jan O’Sullivan responded stating there is no specific legal impediment preventing the taking-in-charge of estates by local authorities.

However, when I spoke to Kildare County Council on 6th May, they confirmed to me that taking-in-charge cannot progress as the new Irish Water rules have put a hold on everything. The establishment of Irish Water has created a conflict between two sets of legislation, which at the very least, a new protocol is required to resolve. Kildare County Council confirmed to me in writing on the 6th May that they cannot take any further estates in charge until Irish Water produce a protocol or the law is changed.

What all this means for householders is that they continue to lie in limbo, paying a property tax but not seeing any return until their estates are taken in charge. Taking-in-charge must be a priority for the incoming council and all these unnecessary obstacles should be addressed by the government without delay.

The establishment of Irish Water has placed unnecessary delays on the taking-in-charge process. The Government must review this now so that local authorities can resume work. A problem exists that they are refusing to acknowledge.

This issue is especially acute given householders are expected to pay the Local Property Tax. The delay in taking-in-charge means tax payers won’t see any benefit from paying the tax as they cannot until then avail of local services despite paying a local tax.