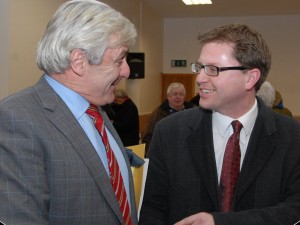 A Garda clinic will commence in Ballymore Eustace starting on August 7th. It will be held weekly every Wednesday from 4-6 pm in the local health centre. Garda Tom is the point of contact for the clinics and can be reached on 0868582695.

The clinic has been set-up in response to local concerns following the recent closure of Ballymore Garda station.

A number of public meetings were held at the time and a clinic was one option discussed where people could still have a local facility to have forms signed, report crime, seek advice etc. Local Fianna Fáil Representative, James Lawless, has been working with Naas Garda Superintendent, Ian Lackey, to roll out these clinics and he welcomed the opening of the Ballymore clinic.

James is also working with the Superintendent to have a similar clinic established in Kill where the village also lost a Garda station this year and James expects to confirm days and times for the Kill clinic next month.