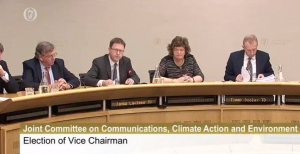 I am very pleased to be appointed to this role, particularly given the support from colleagues from different parties and independents. During my time on the Committee we have held to account various bodies and debated some very important issues such as media ownership, climate change, and items we affect everyday life such as the price of stamps with the then incoming Chair of An Post.

One issue which is of tremendous importance is broadband. Both at a national level and locally in our homes in Kildare North. We need more importance on the role out of high speed broadband in the rural areas and in urban areas were coverage could be stronger. This is one matter I have made a priority since being elected one year ago and will continue to progress in this new Vice Chair role.

The Committee has a very broad remit over policy areas which impinge on the lives of citizens in every corner of the country. The Committee shadows the Department of Communications, Climate Action and Environment and considers general policy matters relating to the functions of this department. The committee also has an oversight role in relation to a number of regulatory bodies (CER, BAI, and ComReg).