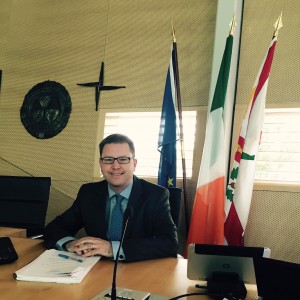 One of the greatest honours of my political life came this week when I was elected Mayor of the Naas municipal district. In assuming the role at our meeting on Tuesday 21st July 2015, I thanked my predecessor, Cllr. Seamie Moore, as outgoing Mayor who has laid the foundations for many of the projects I hope to pursue. I thank my party colleague Cllr. Robert Power for proposing me and I also remembered a recent Mayor, sadly no longer with us, Cllr. Willie Callaghan.

The town of Naas has a proud tradition of Mayoralty and I believe the role is very important, befitting its status as county town, a proud town, a trading town and one I will work hard to represent. Also now for the first time the wider Naas district can also lay claim to a Mayor as the new local government district includes Sallins, Kill, Johnstown, Kilteel, Eadestown, Rathmore, Ardclough, Ballymore, Kilcullen and Caragh.

In my remarks upon being elected I pledged to be a Mayor for all the district and all the people and I look forward to engaging with community groups, sports clubs, business groups, employers and all the various associations that make up the vibrant district of Naas. I also noted that the coming term will span the 1916 commemorations from which origins my own political views were shaped. It is a great honour to assume the role and I look forward to serving the district and all its citizens to the best of my ability.