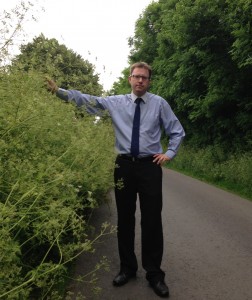 James says he has been approached by numerous people complaining about visibility on the road which is just on the fringe of Naas town and which is used for both the Craddockstown Nursing Home and the Friendly Faces crèche on that road as well as local traffic.

“The road is narrow at the best of times and is very overgrown at present which is causing a serious difficulty for many parents leaving their children to the crèche, many of whom walk out with buggies due to the proximity to the town” said James. “It is also a very popular road for local walkers”.

“The verge is higher than a person and protrudes substantially into the roadway which it makes it very difficult to see what is coming around the corner, both for pedestrians and for road users. There is also significant traffic on the road at times such as the Punchestown festival and the upcoming Oxegen festival. There is no footpath on this road either which all combines to create a hazardous situation”.

“The road safety section of the council have been contacted and said it was outside their scope, it is essential that the roads department would now get involved and even a slight trimming would help allay this situation which will otherwise remain all Summer” said James.

“Whilst there are some restrictions on summer hedge cutting, there is an exemption in the legislation where public safety is at issue. The IFA have previously called for narrowing the restricted date range and I would agree with them. Overgrown verges drastically reduce visibility as weeds and bushes grow out from both sides of already narrow roads. Also the offender in this case is a grass verge, not a hedge. A common sense approach should be taken to a public safety problem” James concluded.