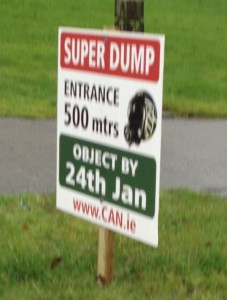 There are a number of concerns over the proposed new waste facility at Kerdiffstown which is in a site adjacent to the A1 landfill which was only recently shut down amongst huge controversy and public expense.

The new application can be viewed in full here. It comes in from an apparently different party to the A1 site operators but there are too many similarities for people to be comfortable about this starting off again. There is such a negative history of waste management and enforcement actions in the area that people are rightly thinking ‘once bitten, twice shy’.

On face value we would all love to believe the site will be restored in perfect harmony with the environment as the application states. However the central issue here is one of trust and a lack of confidence in the regulatory authorities to adequately police this facility if it gets the go-ahead. Residents of the Sallins, Kerdiffstown and Monread areas do not want a repeat of the A1 waste debacle. Even if this plant did begin as a model of best practice, the authorities have not demonstrated an ability to either monitor or take effective action if things did go wrong.

I also have technical concerns arising from the application itself. It seems very coincidental that it is pitched at 98 thousand projected tonnage, just enough to bring it under the lighter permit mechanism as opposed to the more onerous (and EPA controlled) waste licence process were it pitched just a few tonnage higher at one hundred thousand.

Any new operator moving in near this site would have to demonstrate an extra special degree of good faith and a heightened sensitivity to local concerns. However lodging the application Christmas week, the lack of public consultation, and even now continued haggling over the site notice display, has done nothing to quell local suspicions and represents a bad start at the very least.

The council are accepting submissions on this proposal for the next week (closes on the 24th January), I will be making a submission and will publish a copy here but I would also encourage people to make their own submissions and check out further information on the, ‘Clean Air Naas’, CAN.ie website. Submissions can be sent to Kildare County Council, Environmental Section, Áras Chill Dara, Devoy Park, Naas, Co. Kildare or email to environ@kildarecoco.ie , dkennan@kildarecoco.ie  or ccorrigan@kildarecoco.ie .