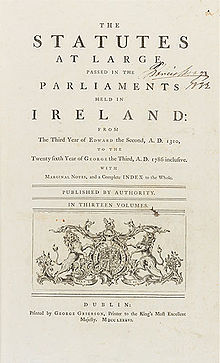 Contracts to pay for the debt of another are where a creditor loans money to a principal debtor and another party, a secondary debtor, undertakes to be responsible for the repayment. The Statute of Frauds Act 1695 defines which contracts must be committed to writing and which can be enforced on solely oral evidence. In this case a verbal indemnity can be enforced on own merits but a guarantee must be committed to writing. There are many who may wish the government guarantee given on the night of September 2008 was given only in verbal form.

My last post was about Brian Lenihan and the tragic echo of unfulfilled promise ala Camelot / Kennedy. The loss manifests in what might have been earlier as much as what might have been later in the sense that his time at the wheel came when the ship was already headed for the rocks.

His period at the helm of Ireland’s finances was possibly the most turbulent any Minister has had to face since independence and must have been especially so for a new Minister only in his brief a matter of weeks when the crisis hit. One cannot help but wonder what might have been had Bertie got over his own issues and recognised talent earlier, and had Brian’s undoubted ability at the cabinet table in the preceding years.

Unfortunately the period will be remembered probably for a series of fairly cataclysmic events running roughly from the guarantee up to the week the IMF landed and including the austerity budgets in between. The full story of those weeks, months, years has yet to be written and it may be many moons before we find out what really went on behind the scenes through that time, if ever. Yet some revelations have emerged into public discourse already such as in Brian’s own BBC interview and in Morgan Kelly’s recent Irish Times piece. I was surprised having coffee with some colleagues recently that these more recent revelations did not seem to have pervaded public consciousness to the extent that I might have expected.

The basic facts are clear. A guarantee was extended in 2009 to cover banking debt, this increased the national debt, along with rapid deterioration in the public finances this created twin pillars of economic and banking crises which proved insoluble in national isolation. Enter the IMF to replace the bond markets along with a programme of austerity agreed in conjunction with the EU and we are where we are.

That much, I believe is understood and uncontested. What is less clear is how, who, why the various events unfolded as they did.

The crisis in the public finances I believe could have been corrected by the austerity budgets. That particular cycle had happened before and may happen again. It was the banking crisis that really did the damage. The banking guarantee appears in hindsight to have been a mistake, yet who is to say what would have happened in the alternative, whether the banking system and perhaps the entire economy collapsed literally overnight? Could a single bank (Anglo) been allowed go to the wall, as effectively happened with Lehman brothers in the states previously. It is intuitively attractive to suggest that it could, yet it seems the prevailing argument against was really one of Euro Zone stability, rather or at least more so, than any vested local interest. Brian Lenihan in an interview for FrontLine in the early days of the crisis repeatedly stressed that no European bank had failed in the post war ear and it wouldn’t start here now. It is possible there was an element of pride in this, that Ireland would not be the one to let the side down. It is also possible and quite probable that the EU were strong arming the position and no bank would be allowed to fail without a flood of punitive consequences for the errant nation. It is also the case that despite the scornful commentary since, the weight of economic opinion at the time was divided on the issue with later critics such as McWilliams at the time calling for such a solution. In fact on the night the guarantee was voted through the Dáil, it was supported by all parties, except Labour who alone opposed. In fact, while it seems ironic now, I remember a Fine Gael friend saying to to me at the time “Labour will pay for this” (for opposing the guarauntee) . And yet one can’t help feel Labour opposed merely because they could as they grand standed on so many other issues in opposition. And of course FG swept home to a huge election victory despite having supported it.

I will return to this subject again in later posts..