James Lawless is a long serving active member of the Fianna Fáil party and will be contesting the Committee of Twenty elections at this year’s Ard-Fheis. 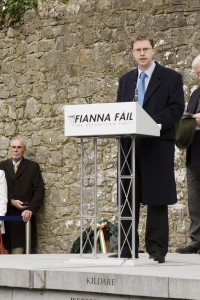 James has been active politically since university when he was involved in students union campaigns. James is a former Chair of Wexford Ógra Fianna Fáil and is currently Chair of the Sallins Cumann and vice-Chair of Naas Comhairle Ceantair. James served at national level before as a Leinster rep on the National Youth Committee. In 2011 James re-established the Cearbhall Ó’Dálaigh cumann at Kings Inns and is currently Chair. In 2009 James ran for local elections to Kildare county council as a  Fianna Fáil candidate – despite a record low for the party, James polled credibly for a first time candidate achieving half a quota on the first count and was the last to be eliminated. James would be economically centrist whilst being more conservative on social issues. Public transport, area planning, political and legal reforms are policy interests allied to a strong Republican ideology. James is a strong believer in traditional party heritage and is a local organiser of the annual Wolfe Tone commemoration at Bodenstown (as pictured). He was also part of the team behind the new Fianna Fáil magazine, CUISLE, launched recently.

Growing up in north Wexford, as a young adult James worked at a variety of jobs in the tourist and service industries. Since college his professional career has been largely within IT. Currently he works as a systems analyst within the insurance and financial service industries.

James studied at Trinity College from where he has a primary degree in Mathematics and a masters degree in High Performance Computing. James is currently studying law by night at Kings Inns where he recently took first place in exams overall as well as a number of individual prizes.

In his spare time James enjoys jogging, a round of golf or exploring the great outdoors with his children and their dogs. James is also a keen follower of Gaelic games and is involved locally with Sallins GAA.

2 Replies to “About James Lawless”